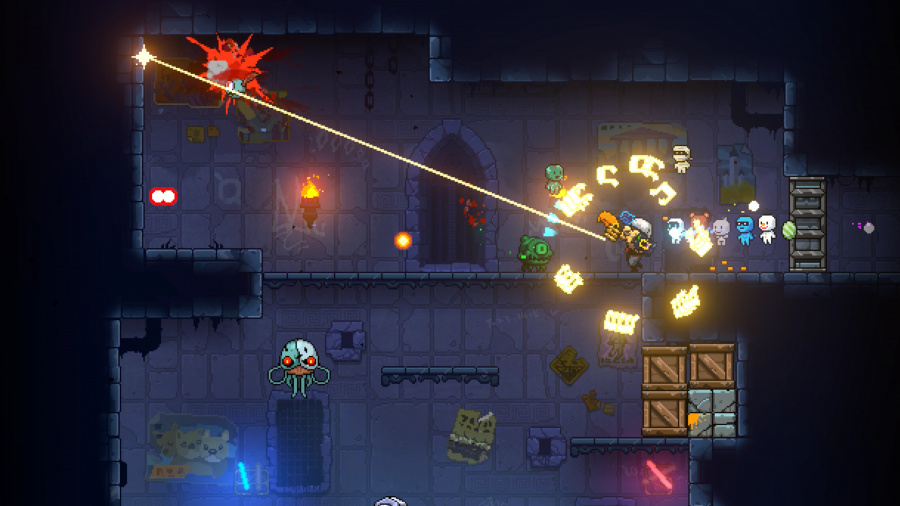 Neon Abyss is a procedurally generated, rogue-like platformer that takes heavy inspiration from the likes of Enter the Gungeon and The Binding of Isaac. You play as part of the Hades formed ‘Grim Squad’ and are thrown into the Abyss, equipped with nothing more than a gun to blast through room after room of menacing foes in order to reach and slay the manager of each floor.

In terms of gameplay, Neon Abyss goes for a more simplistic approach than other rogue-likes, as it opts not to have a dodge roll button at all. Instead, you have to dodge incoming projectiles by just walking and jumping out of the way, which is definitely easier said than done in a 2D environment. There are so many occasions where you have no other option but to take damage or even die because there are just so many bullets on screen, and no available way of avoiding them.

As you progress through the floors, you’ll encounter a good variety of weapons and items that synergise with each other to create various outcomes. For instance, if you collect the popcorn item, which causes your bullets to explode, and also collect the Elastic Gel, which causes your bullets to rebound off walls, you will have rebounding exploding bullets. The different synergies in the game get crazier the further you progress and the more items you unlock; it certainly makes the game feel fun and fresh on every run through the Abyss. 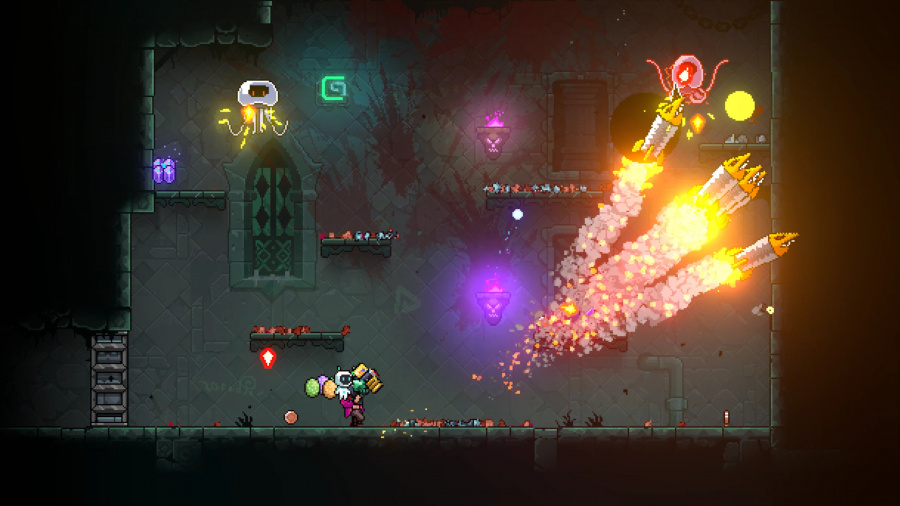 The game also introduces a new mechanic not seen in any other rogue-like: eggs. These eggs can be collected from chests littered throughout the dungeon and, upon room completion, have a chance to hatch into a little buddy, who is willing to help you out. These companions have various abilities, from throwing snowballs at enemies to stun them, to collecting money and dropping hearts. They also have the chance of evolving to become stronger and more useful throughout your journey. It’s an excellent addition that helps Neon Abyss stand out from its competitors.

The game is very fast paced and chaotic, which can occasionally cause some frame rate drops in the more populated rooms. We experienced noticeable drops on many occasions when there were a lot of enemies, bullets, and explosions within a room. The other noticeable downside to the rooms being so chaotic is trying to see the incoming projectiles to be able to dodge them. On several occasions, we’d be confused as to what we took damage from, as we couldn’t depict the bullet from the background.

Neon Abyss is a fun, fast-paced twist on the rogue-like genre with a solid core gameplay loop. Although it brings new ideas to the table in the form of collectible eggs, and it has a good variety of weapons, enemies and synergies, it’s not without its drawbacks. Performance issues, the lack of the genre’s typical dodge button, and the chaotic room design all prevent Neon Abyss from being a must buy title.

PS5 Dualsense Controller Is a Little Bigger, a Little Heavier Than the DualShock 4